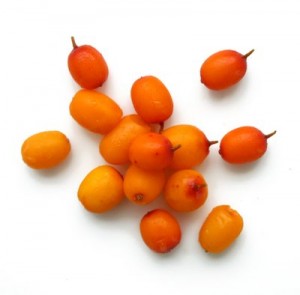 Sea Buckthorn (Hippophae rhamnoides) is found throughout Europe and Asia, particularly eastern Europe and central Asia. The plant’s orange fruit and the oil from its pulp and seeds have been used traditionally for skin conditions, coughing, phlegm reduction, and digestive disorders.  Today Sea Buckthorn is turning a lot of heads in the USA for it’s incredible and comprehensive health benefits that support the entire body.

Sea Buckthorn has been used for centuries in Mongolia, China, and Tibet. In Tibet, Sea Buckthorn is recommended for pulmonary disorders, cough, colds, fever, inflammation, abscesses, toxicity, constipation, tumors, and gynecological diseases.  Generally, sea buckthorn is considered a panacea in these cultures.

According to the Chinese Pharmacopeia, internal use of Sea Buckthorn is recommended as a pain reliever, cough suppressant, expectorant, digestive tonic, and blood flow promoter. In traditional Chinese medicine, Sea Buckthorn is mainly used as an expectorant and soothing agent.

In Russia, Sea Buckthorn seed and fruit oil have been used topically for eczema, psoriasis burns, frostbite, lupus, and cervical erosion, and internally for blood clots as well as eye disorders. In Tajikistan, sea buckthorn flowers are used to soften the skin. In other parts of central Asia, the leaves are used internally for gastrointestinal and skin disorders and topically for rheumatoid arthritis. In India, sea buckthorn fruit is used to treat lung, gastrointestinal, heart, blood, liver, and metabolic disorders. 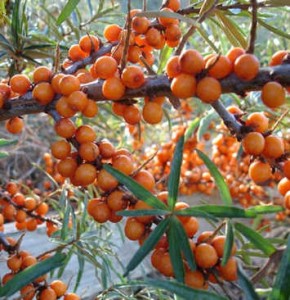 Sea Buckthorn is also the perfect natural supplement for those who have problems with their mucus membranes. Mucus membranes are important to the digestive tract, as well as the respiratory and urogenital tracts. Those membranes also keep your eyes healthy. When aging processed causes the mucus membranes system to slow and now perform, Sea Buckthorn is an important part of membrane repair. Its essential Omega 7 fatty acid properties improve one’s mucus health, creating a better barrier against allergens, moisturize their body, and repair the natural rhythm of the body’s tract systems.  Learn about sea buckthorn’s impressive Omega-7 content here.

Vitamins with antioxidant properties form a natural line of defense against free radicals; they “catch” free radicals and neutralize them. These anti-oxidant vitamins, all present in Sea Buckthorn oil, are vitamin A (derived from -carotene), vitamin C (ascorbic acid) and vitamin E (-tocopherol).

A study, published in the Journal of Functional Foods, suggests that the cardio-protective effects of Sea Buckthorn flavonoids have been 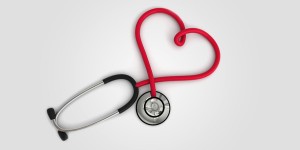 attributed to their ability to increase circulating lipid markers, act as powerful antioxidants, improve cardiac cell health and prevent cardiac cell death from oxidative stress and injuries. “Dietary modification by inclusion of foods with bioactive components (such as n-3 polyunsaturated fatty acids, plant sterols, antioxidants and vitamins) is one of the major factors for lifestyle changes to reduce the risk of cardiovascular disease,” said study author Y. J. Xu and colleagues.  Read more about sea buckthorn and your cardiovascular health here.

Findings from animal-based research suggest that Sea Buckthorn may promote wound healing when applied topically. In a 2009 study in Food and Chemical Toxicology, scientists discovered that topically applied Sea Buckthorn seed oil helped speed up the healing of burn wounds in rats.

In a small 2010 study in the European Journal of Clinical Nutrition, researchers found that Sea Buckthorn may help keep blood sugar in check and protect against type 2 diabetes. In an experiment involving 10 healthy, normal-weight volunteers, the study’s authors discovered that adding Sea Buckthorn berries to meals helped prevent a post-meal spike in blood sugar. 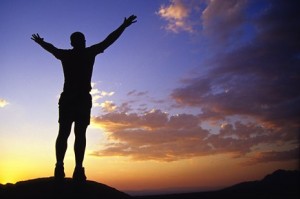 When you need to supplement your dietary regimen to incorporate necessary omega fats and other bioactive compounds into your overall well-being, Sea Buckthorn could be the way to alter you strategy. In addition to having significant vitamins, anti-oxidants and the critical essential fatty acids, you will find that other nutrients also demonstrate some of the most critical benefits in the improvement of nail tone, hair, texture and skin, as well as marketing of a healthy and balanced aging and digestive wellness.

5 thoughts on “Take Sea Buckthorn Every Day for Overall Wellness”