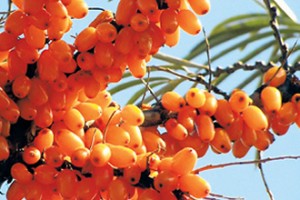 Sea-buckthorn berry can be harvested only once every two years. It can produce up to 15 kg of fruit at a time.

ALSO called sandthorn, sallowthorn or seaberry, and tyrni in Finnish, the sea-buckthorn berry is one of nature’s most powerful plants. It offers one of the widest ranges of nutrients from a single source found on earth, including antioxidants, vitamins, minerals, polyphenols, omega fatty acids, carotenoids, and more.

Harvested in Finland in large quantities and native to other countries of Northern Europe and Asia, it is also able to grow anywhere in temperate latitudes; sea-buckthorn is well adapted to cold climates and has thrived in Canada since its introduction there fifty years ago. 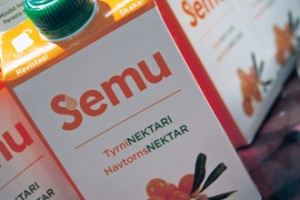 Semu, is a new company developing a line of products exclusively on this berry, such as 100 per cent sea-buckthorn nectar.

Sea-buckthorn berries are edible and extremely nutritious; due to their astringent and oily texture, however, they are not commonly eaten raw but rather consumed as drinks with sweeter substances. They can, nonetheless, be frozen to reduce their astringent quality.

When pressed, the resulting juice separates into three layers: the top two layers are suitable for cosmetic purposes such as skin creams because of their high proportion of saturated and polyunsaturated fats, and the bottom layer is sediment and juice, which can be used for edible products like syrup.

Omega-7 fatty acids are fundamental building blocks of healthy skin and mucous membranes. Sea-buckthorn contains the highest amounts of omega-7 on earth. It helps treat ulcers and different gastrointestinal problems due to its restorative effect on mucous membranes.

Because of its high omega-7 and vitamin A content, the oil extracted from this berry is the ultimate tissue healer. Used externally to even skin tone and texture as well as to improve skin issues such as acne or eczema, it also reduces the signs of aging while reducing the appearance of wrinkles and boosting collagen production. Sea-buckthorn oil is a perfect ingredient in skin creams and other cosmetic products.

It is important, however, to know which sea-buckthorn oil to buy. It is crucial to find the oil with the highest percentage of omega-7, which depends greatly on the place the berries have been harvested.

Oils containing at least 30 per cent guarantee the highest values this berry brings and that it has not been diluted with other oils. Note that the majority of sea-buckthorn’s omega-7 content is found in the berry, so the seed oil is no substitute.

Sea-buckthorn in our products

In Finland, this berry has been rediscovered and appreciated, as well as promoted in different products such as GoodPie’s Bakery’s Valillan tyrni-mallas, which is a sea-buckthorn berry flavoured malt loaf. Semu, a relatively new company, has developed a whole line of products, including a 100 per cent natural nectar, jams, and for the festivities, a sea-buckthorn Glögi. For now, the nectar can be found in different supermarkets accessible to all.

With all this in mind, let’s think twice before neglecting this small berry that brings so much in so many ways.