Prickly weed in Scotland may be next superfood

Sea buckthorn, which grows in abundance around Scottish coasts, may be the next superfruit. 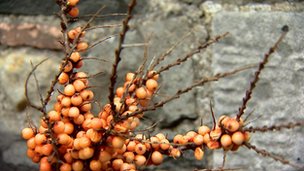 Despite often being viewed as an invasive prickly weed, the plant’s bright orange berries are packed with vitamins, minerals and antioxidants.

Now, scientists from Edinburgh’s Queen Margaret University are working on ways to use them in drinks and food.

Previously, Scots have not exploited the nutritional benefits of Sea Buckthorn due to the problems associated with its harvesting and the often bitter taste of the berries.

Popular in China, Norway and Russia, it is usually added to cereal and desserts.

It can normally be found growing in Scottish coastal areas near sand dunes, particularly in East Lothian.

If planted correctly it can help stabilise sand dunes next to golf courses, preserve areas of natural interest, and protect other plants by reducing salt spray produced by cars.

Since 2008, Queen Margaret University has been researching the nutritional properties of Sea Buckthorn and has run various trials for small food producers who are looking to enhance the nutritional content of their products while also adding a Scottish twist.

Graham Stoddart, owner of Cuddybridge, a small Scottish hand-pressed apple juice producer, said: “Although, the properties of apple juice are well documented, the effects of Sea Buckthorn, with its excellent antioxidant properties, and its application for the fresh juice market when mixed with apples, have little or no documentation.”

Cuddybridge presses a variety of apples throughout the year, but due to the seasonality of Sea Buckthorn, the combined Apple and Sea Buckthorn juice is only available as a fresh juice between September and February.

“We are excited that our work in this area is changing the reputation of this undervalued plant to one which can add nutritional value to the Scottish diet.”

3 Responses to Prickly weed in Scotland may be next superfood