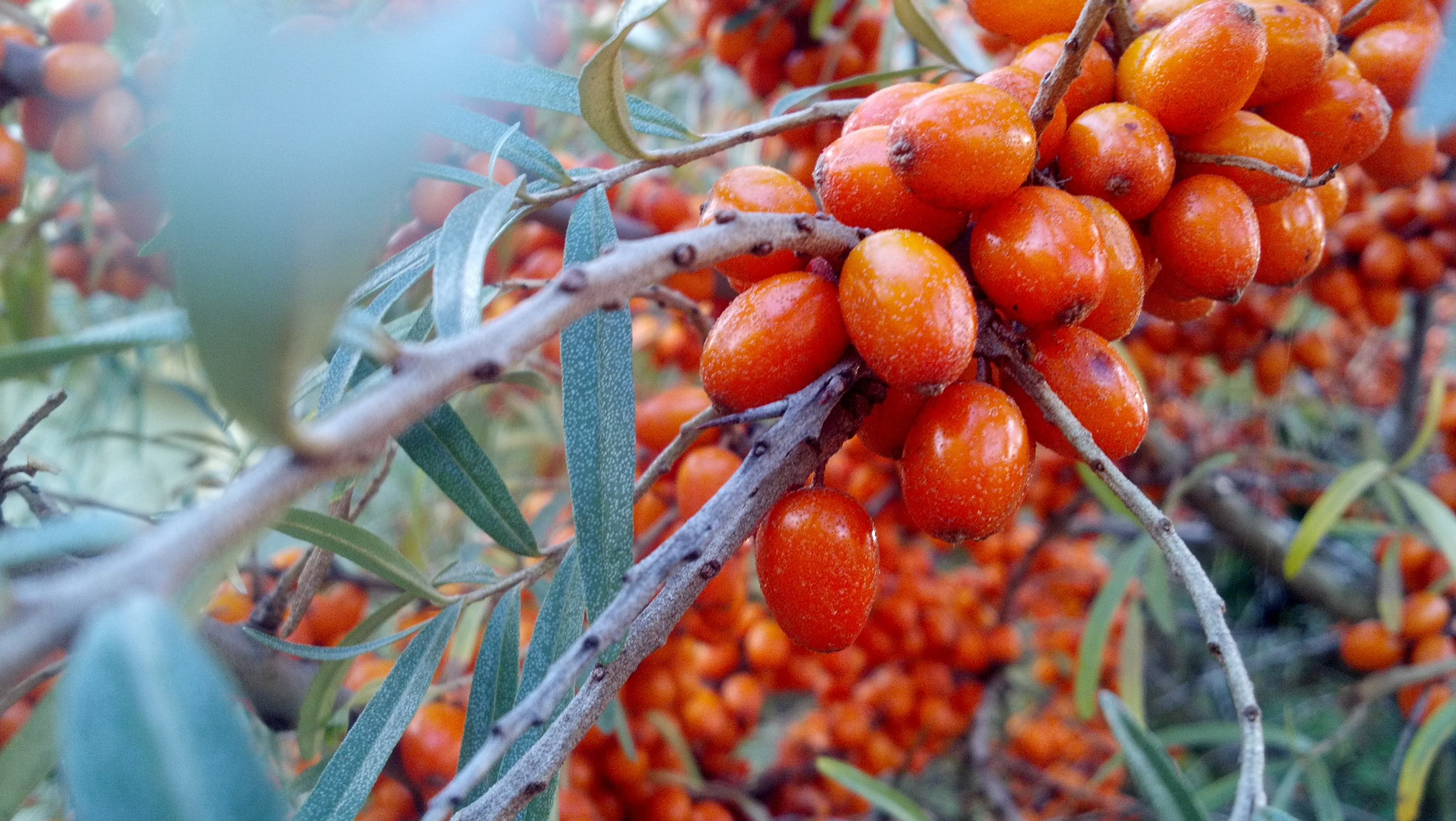 The first time I bit into a juicy Sea-Buckthorn berry, the sweet and tart taste reminded me of two rather disparate things: SweeTarts candies and pineapple. Also known as Seaberry, Sandthorn, or Sallowthorn, this gorgeous ornamental in the Oleaster Family grows as a shrub in partial shade or full sun. In Portland, it’s sometimes planted in sidewalk strips. It thrives in the northern half of North America, though it is native to India, Nepal, and broader Eurasia; I first learned about it when Berlin Plants blogged about it three years ago here.

The bright orange berries of sea-buckthorn, Hippophae rhamnoides, ripen in early fall. As the months go on the berries actually ferment on the tree, so that later in the winter and into spring they taste like berry-infused brandy! It’s very cool. When you pick the berries, just be careful to avoid getting stabbed in the finger or eyeball by thorns! 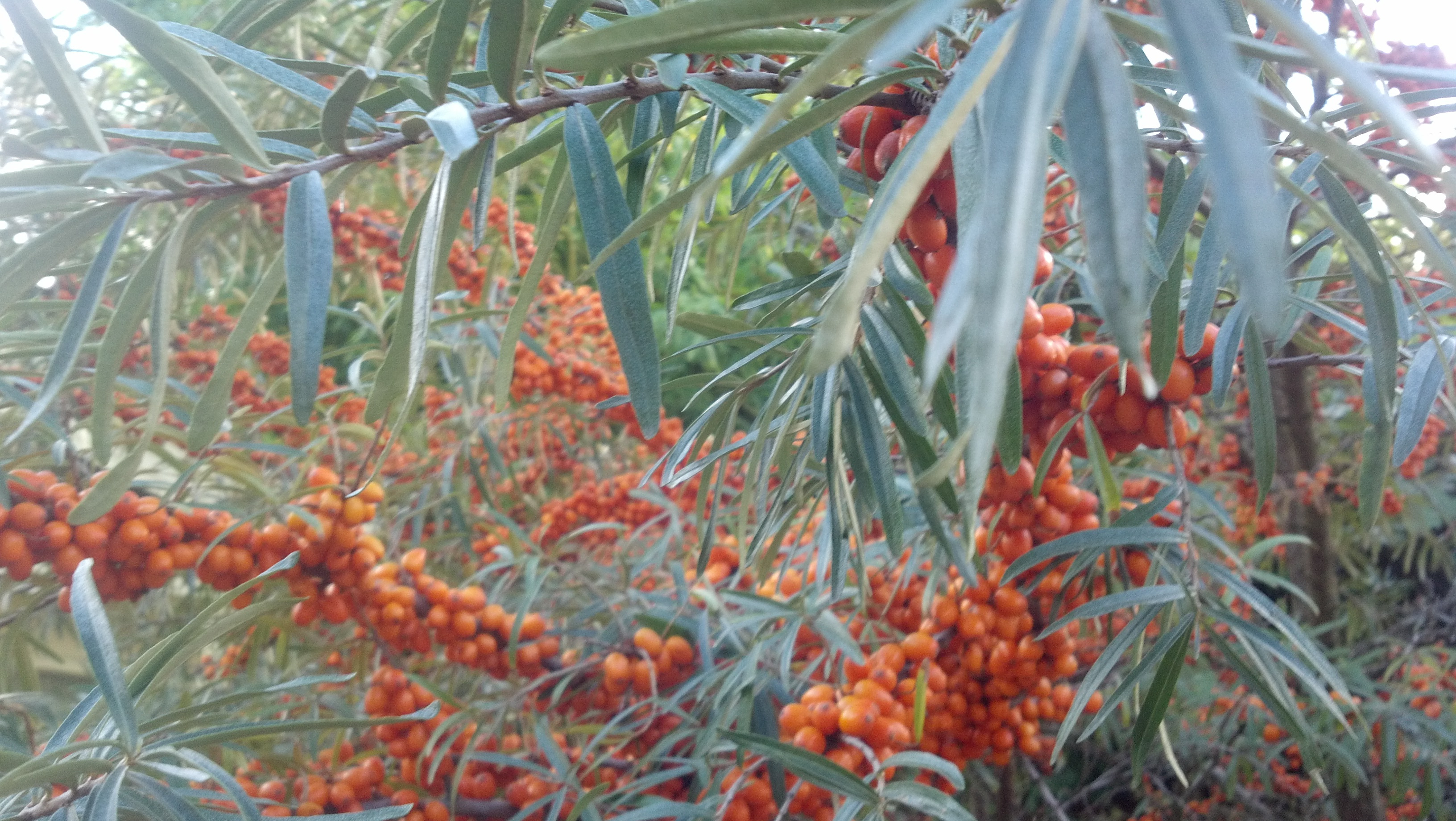 Most people choose to plant Sea-buckthorn as an ornamental because they like the look of its lovely silver-green leaves, but it happens to be a nutritional and medicinal powerhouse. The berries (including seeds and pulp)  contain fatty acids and carotenoids, Vitamin E, Vitamin C — even higher than the amount found in lemons and oranges — Vitamins B1, B2 and E; provitamin A, rutin, serotonin, cytosterol, selenium and zinc. They are also high in antioxidants.

The berries are also amazingly medicinal with a wide range of applications from killing cancer cells to healing ulcers, and sea-buckthorn oil is commonly found in anti-wrinkle cosmetic products. Sea-buckthorn has a long history of use in herbal medicine, going back to ancient Greece and recorded in the eighth century Tibetan medical classic “rGyud Bzi.” The fruit has been shown in animal studies to reduce blood pressure, cholesterol, and triglycerides when taken internally. Sea-buckthorn berry can kill both cancer cells of S180, P388, SGC7901 and lymphatic leukemia. It has also been shown to have a stress-reducing (adaptogenic) effect. Sea-buckthorn heals ulcers and is anti-inflammatory, is taken as a liver protective agent, and — important in this age of worries about Fukushima’s long-term consequences — has an anti-radiation effect.  The leaves can also be dried and taken as a nutrient-rich tea. The leaves have been demonstrated in animal studies to be an excellent vulnerary (wound-healing) herb when applied externally and historically they were traditionally used as a skin-healing agent. 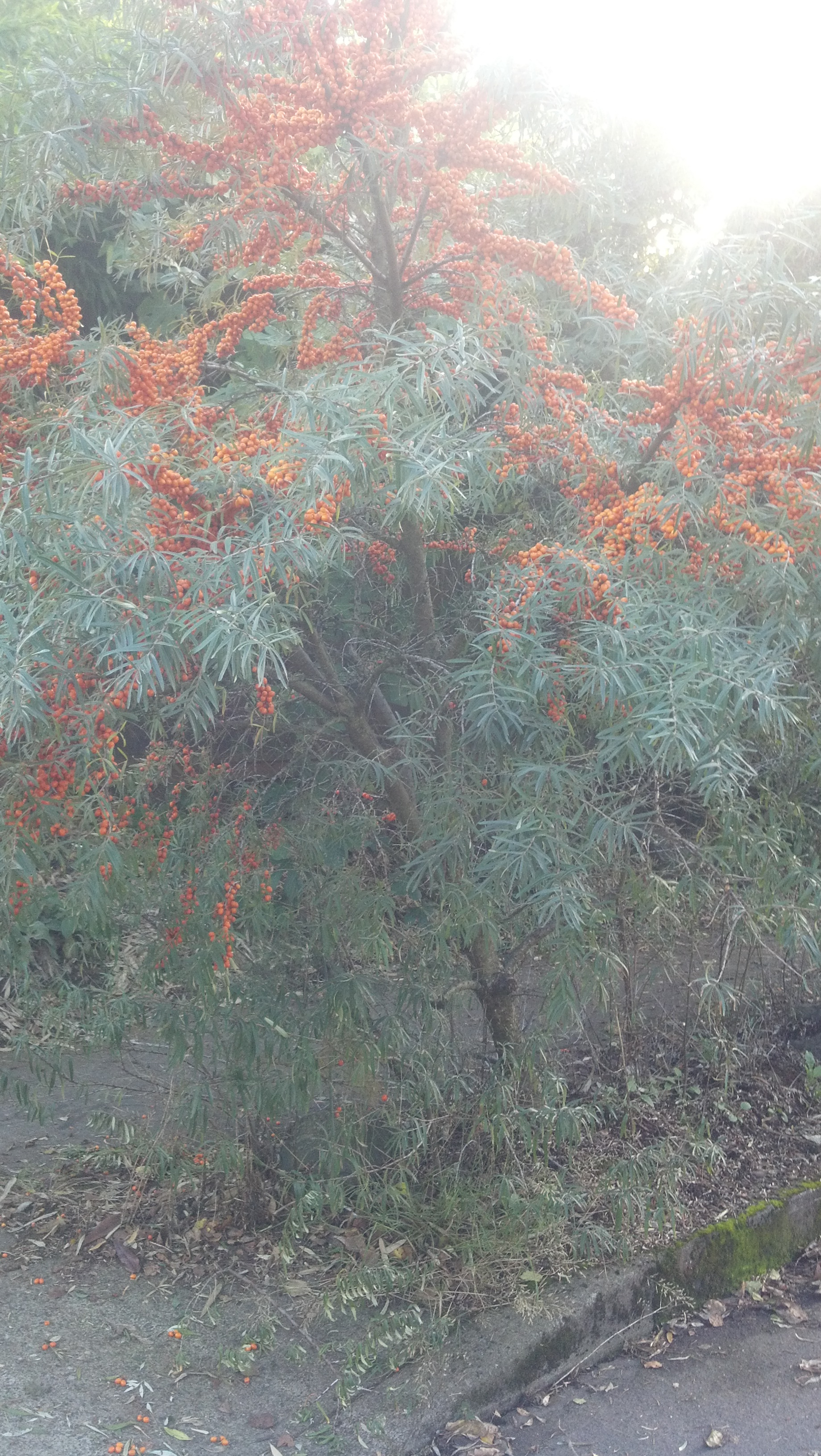 Sea-buckthorn on a foggy day

(FYI: The fruit is the primary medicinal and nutritional part of the plant; the sea-buckthorn oil commonly found in cosmetic products comes from the seed inside of it.)

For identification: Leaves are simple, deciduous, silvery-green on upper surface, paler green on the underside, narrow, lanceolate, and alternate. The bright orange berries are densely clustered and arranged very close to the branch (as opposed to hanging like a cherry).

The berries can be enjoyed raw. They are very juicy and are commonly used as an ingredient in fruit juice blends in Europe. Because they taste sour, one would do well to add sugar or sweet juices to the mix. The berries can also be made into fruit wine or liquor, and also jellies.

Have you ever tasted this plant? What sorts of things do you like to do with it, if so?

** INSIDER NOTE ** Have to disagree with this statement although this is a fantastic article:

“(FYI: The fruit is the primary medicinal and nutritional part of the plant; the sea-buckthorn oil commonly found in cosmetic products comes from the seed inside of it.)

The fruit AND oil are the primary nutritional parts of the plant. The oil IS an extract of the fruit’s essence and typically comes from the Berry or the Seed. The oil is used medicinally all the time across the world and the fruit is eaten raw, cooked in recipes, mashed into jams and juices, and other consumables.

This entry was posted in Cancer, Health Benefits, News. Bookmark the permalink.