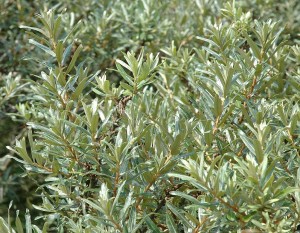 For a while now, we’ve wanted to start profiling certain plant species here on our site.  There are a few reasons for this:  First, a lot of these plants are unfamiliar to American gardeners (outside of  some permaculture circles, that is!), and they definitely deserve a bit more popularity for several reasons.  Second, we want to show that functional plants (edible, medicinal, etc.) can serve very powerful aesthetic purposes in the landscape as well.  We hope that you will enjoy these profiles as we post them, and that you gain an appreciation of these amazing plants! 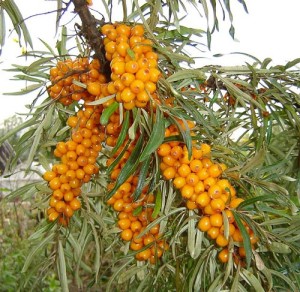 Sea Buckthorn (Hippophae rhamnoides) is a large shrub in the Elaeagnaceae family that is native to Europe and Asia – it can be found from Britain to Japan, Norway to the Himalayas.  In the wild, Sea Buckthorn is typically found near the coast (hence the ‘Sea’ in its common name), growing out of cliffs and sand dunes.  What is interesting is that by evolving to grow in these harsh conditions (sandy alkaline soils, exposure to salt, etc.), it basically has the ability to grow in nearly any soil and any conditions you can throw at it (wet, dry, near roads where they put down salt in the winter, etc.), which is great for gardeners in many different kinds of growing areas. 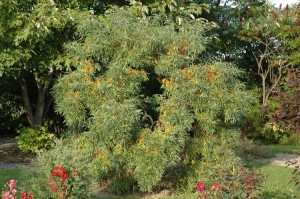 One of the reasons that Sea Buckthorn can survive in so many different kinds of conditions is that it, like other members of the Elaeagnaceae family, is what is called a nitrogen fixer.  Basically, this plant forms associations with soil microorganisms (in this case, a genus of actinomycetes called Frankia) .  The plant absorbs atmospheric nitrogen, which is not readily used by plants, and transfers it to its roots, where it is “processed” by the microorganisms (in exchange for plant sugars and nutrients) into a form of nitrogen which IS available for uptake by plant roots.  What this means, is that the plant provides its own fertilizer.  This fertilizer is available for use by other plants, too – when its roots die back (which happens naturally or can be encouraged by coppicing, as described below), or when it drops its leaves in the fall, the nitrogen concentrated in these tissues remains in the soil, available for uptake by any nearby plant.  Having these nitrogen fixing plants in the garden can reduce or eliminate the need for external inputs of nitrogen and other elements commonly found in fertilizers. 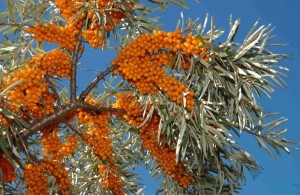 Aside from providing a good amount of fertility to the garden, Sea Buckthorn can serve many other functions in the garden.  It makes a great hedge for keeping out unwanted intruders (human, deer or otherwise) – it does have thorns, so avoid placing near paths or where children play.  It is a very beautiful plant – silvery gray-green, almost needle-like foliage gives it a very Mediterranean-like appearance.  When it bears fruit in the fall, the plant is literally COVERED with brilliant orange berries – very much like Winterberry (Ilex verticillata), a common shrub in eastern American gardens.  We’ll talk more about the fruit below.  Sea Buckthorn can get to be 10-20 feet tall if left to its own devices, but can be kept reasonably small by coppicing (cutting it to just above ground level in the winter when it has gone dormant) every few years.  It is an excellent plant for holding together soil and preventing erosion. 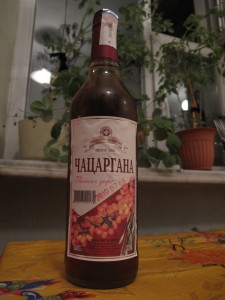 Sea Buckthorn fruit is not very good fresh – the berries are very tart and astringent, but they make an incredible juice when steamed or pressed and then sweetened.  They are incredibly nutritious, too – incredibly high in Vitamin C and Vitamin A, antioxidants, and healthy fatty acids.  Jams, jellies and wines made from Sea Buckthorn are delicious.  The fruit yields an edible oil which can be used for cooking, and is also used to make an inexpensive and easily produced biodiesel fuel.  Other uses of the plant include medicines, cosmetics, charcoal, wood fuel, and yellow dye.

To conclude, Sea Buckthorn is an incredibly beautiful, useful, multifunctional plant that we think deserves more of a place in our gardens and landscapes.  Stay tuned for more useful plant species profiles, there’s a whole world to cover!